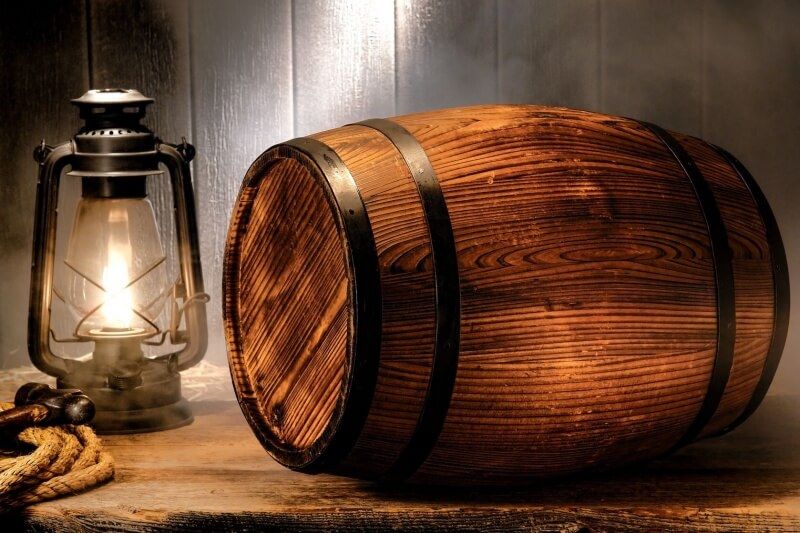 Whether you buy whiskey or wine, liquor or cognac, sherry or beer, it most likely comes from the oak barrel. Coopers (people, who make barrels and fill them with wine) say that oak is a unique tree: its “purity” is greatly appreciated –it never makes the drink’s taste worse; its smooth structure, unlike the pine trees, easily leads oxygen in and out of barrel, so that the drink doesn’t spoil; its physical advantage is toughness it doesn’t let the drink lick out of the barrel. Moreover, oak barrel has a special vanilla flavor in it, which is later spread on whiskey. It also removes undesirable taste and adds maturity to the drink. Perhaps, maturity is the main reason: immature whiskey doesn’t taste well.

The production of the whiskey barrel is not an easy thing, but result makes the process worthy. The oak trees are cut down only when they reach 7.5 meters tall and 1 meter in diameter. Once the trunk is sent to sawmill, the staves for the barrel are cut out. It usually takes over 30 staves to make the cask and about 15 to seal up its ends. In order to make sure that the cask is sealed up correctly, coopers expose it to the fire from inside and outside. To make the cask breathable, wooden barrels are never painted or varnished. And finally, the whole in the bottle is made for checks in taste changes and simplifying the process of emptying the bottle.

One of the most frequently asked questions from customers is “How to choose a good whiskey?” Usually, the label on the bottle gives us valuable information such as the level of maturity. Quite often independent companies also put a type of cask and oak barrel sizes. The basic thing to remember is that the smaller the cask, the more whiskey interacts with the wood. Here is a list of possible cask size and the quality of its content:

Is mostly a beer barrel, but is not rear for whiskey.

Is highly reactive with spirits, quickly gives flavor to whiskey.

American Standard Barrel is made from American White Oak, which is widely used in a bourbon barrel industry.

Hogshead wooden barrels are the most popular bourbon barrels, which are used for whiskey. In 15th century this term was used to call the 63-gallon bottle. Like ASB, is used for Scottish and Irish whiskey

The only reason whiskey is put into this famous wine cask is to give it the wine flavor. The wine fans will be pleased for sure!

There are 2 kinds of puncheon barrels: “machine puncheon” and “sherry shape puncheon”. Both of the kinds are used for rum and sherry; this barrel is rather to help whiskey’s maturity.

Made from European Oak, they are mostly used for sherry.

Same is Barrique, but made from European Oak.

Different kinds of whiskey are mixed up in such bottles. Later on, they are used for blending whiskey production

Today’s world is hard to imagine without wooden barrels, because almost every kind of alcoholic drink requires staying in the oak cask. For sure, everything would be different if Romans didn’t create the first oak barrel.