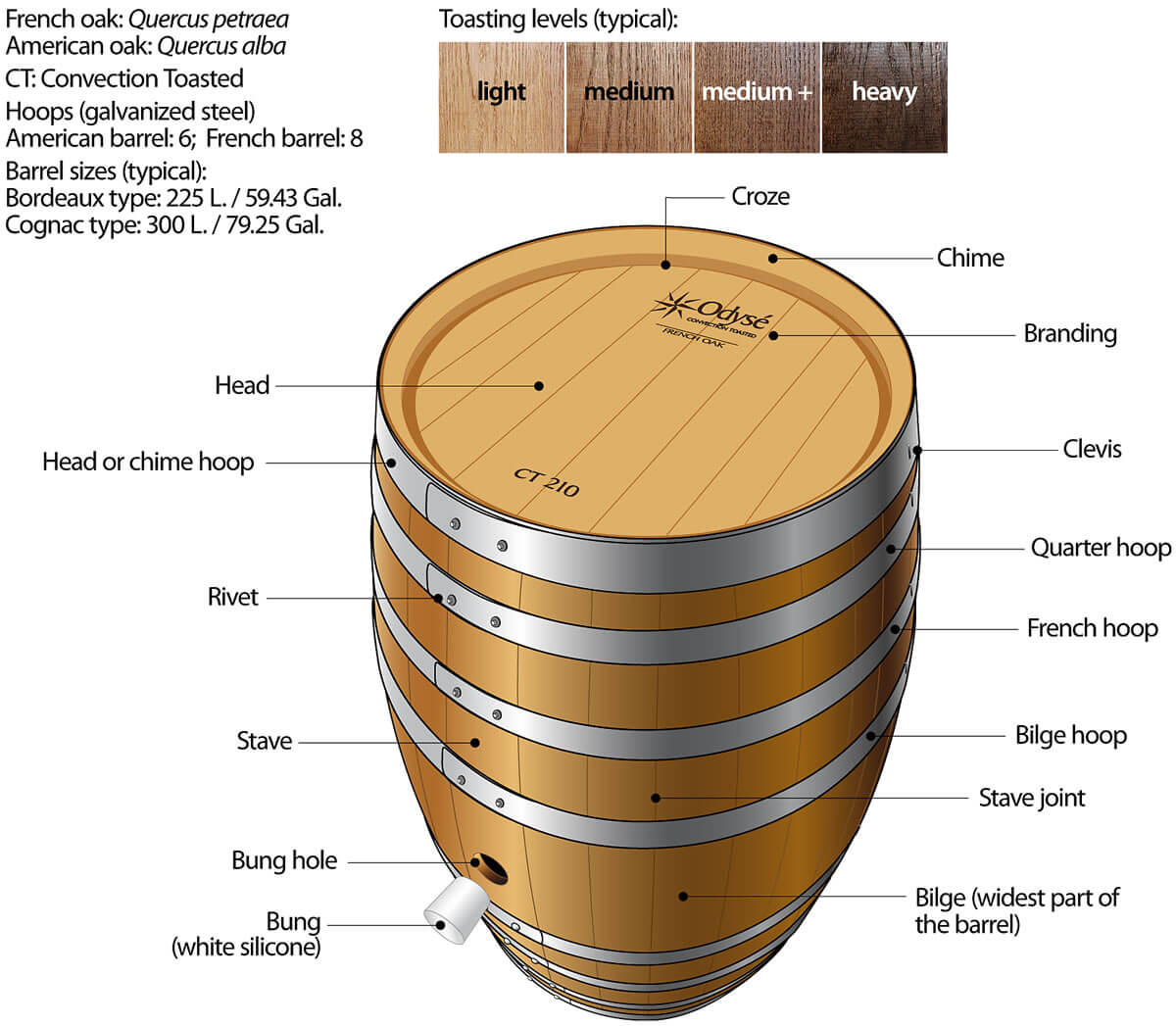 How to use the barrels

Making a barrel is not just a time-consuming process, but at some point, an ancient form of art. It is believed to be time consuming because good cooper can make one barrel in a day; it’s ancient because technologies haven’t changed much in the last 2000 years.

The first step in producing a barrel is choosing the tree. As you know, it’s usually either American or French oak or sometimes Hungarian. If we are talking about the American oak, it was most likely grown somewhere in Iowa, Missouri, Ohio, or Kentucky (U.S.). The French Oak grows in Alliers, Limousin, Nevers, Vosgues and Troncais forests (France). Once cooper cuts the trees into the staves, they are put outside for two or three years for seasoning. It is necessary in order to let microbes produce desired flavors, such as vanilla. It will also help the winemakers reach the preferred woody taste.

You might wonder who the cooper is. It comes from an ancient Latin (cupa) or German word (kupe), which mean barrel in both of these languages. Over the years the word transformed into the cooper and is used to describe a person, who makes barrels. If you or one of your relatives and acquaintances has a surname Cooper or Hooper, one of your ancestors was most likely involved in winemaking!

Meanwhile, we will come back to our barrel. After the wood is seasoned, a master cooper assembles about 30 staves of different sizes (usually, it’s the combination of thick, thin and medium desks) under the metal hoop and try to shape the opposite end of the staves symmetrically, putting more and more hoops over the staves. So far, the structure of the barrel looks like that:

Right after that, the cask has to toasted, which means leaked by fire from the inside. Occasionally, coopers choose the medium level of toasting, but for the white wine a light toasting level would be enough. The junior cooper must remember that heavy level of toasting is mostly for the bourbon and might affect wine not in the best way! After diameter is measured, cooper cuts two circles out of the flat wood and puts them over the chime hoops. Finally, we drill a hole in the cask in order to check at times how our wine is aging and whoa-la: the barrel is finished!

When barrel is done, it goes to the QC department for the first test. A cooper rolls the barrel from side to side in order to find the licks. If the cask didn’t leak, a cooper will pressure the barrel with water. If it sustained both challenges, the cask is perfectly made. Next are toasting consistency and water toughness tests. If cask completes all of the tests successfully, it can be used for fills.

The wine ages in the barrel for a year before it is removed. After the first fill wine has the woodiest taste; after the second fill it mostly has the vanilla taste; the third fill is considered to be neutral, thus it is the last fill. After that the great companies sell the barrel either to the smaller wineries or to the people, who like to make the wine at home.